We all have memories of our favourite mascots from Tony the Tiger to Michelin Man (116 years old by the way!) and more recently Aleksandr from Compare the Market.

Characters are used in all industries including food, household products, technology, insurance and entertainment. But why choose a character to represent your brand? Here are five reasons you might want to consider developing one for yours.

1. They Add Life to a Seemingly Boring Product

It’s the rare human that’s looks forward to buying insurance. Despite that, a brand like Compare the Market makes the process entertaining with their mascot Aleksandr the meerkat and the rest of the meerkat gang. People collect the soft toys, incentivising them to take all of their insurance out through this comparison giant. Aleksandr even published an autobiography!? They made insurance fun. Think you have a boring product? It might not be as dull as you think!

2. They Don’t Get Into Scandals

How often do you hear of a brand distancing themselves from a celebrity ambassador after a tabloid scandal? Tiger Woods and Nike, Sharon Stone and Dior and even A list celebs like Kerry Katona and Iceland. Celebrities, despite what some people say are human, and humans make mistakes. These mistakes can cost companies hundreds of thousands if not millions in brand damage.

Mascots on the other hand are loyal servants, they’d never use an iPhone if they were sponsored by Motorola (cough…Beckham) or shave their head when endorsing Brylcreem (Beckham!… Cough cough).? They do exactly what you want them to do. There have been controversial mascots in the past, but these are few and far between and no one’s blaming the mascots!

3. They Can Last for Generations

The classic example is Mickey Mouse. It’s difficult to separate the image of the lovable rodent from one of the largest companies on the planet. He’s known by almost everyone in the world and loved by generations. My wife has his silhouette tattooed on the back of her neck, but let’s not get into that!The point is, a lovable character mascot can add value to a brand for years, decades or even centuries. I’m looking at you Quaker Man!

A good mascot is iconic and we’re really good at recognising icons. Even in the tech world a brand like Mailchimp is much more memorable (at least to me) than its competitors, who I can’t even recall right now. Another good tech example is Hostgator who have that blue alligator mascot. Again, these aren’t sexy products, but they embed themselves into our minds by the effective use of characters.

5. They Can Speak to Your Target Audience

Remember in the early nineties when the games console war was between Nintendo and Sega? Nintendo had their wholesome Italian plumber Mario who appealed to families. Then came along Sonic, the edgy blue hedgehog with bags of attitude. He appealed to more hardcore gamers and angsty teens. He was the rebel. He spoke to them in a way they wanted to be spoken to. They had an icon that represented them (Sonic was the reason I really got into illustration as a kid). Your mascot can talk to different demographics in a style that resonates with and stands for them.

Need a Mascot for Your Brand or Have a Client that Would Benefit from One?

A mascot, done right can really add a lot of value to a brand. Want to discuss developing one for your business or for a client? Send me a message or email rob@roblee.co and we can arrange a call! 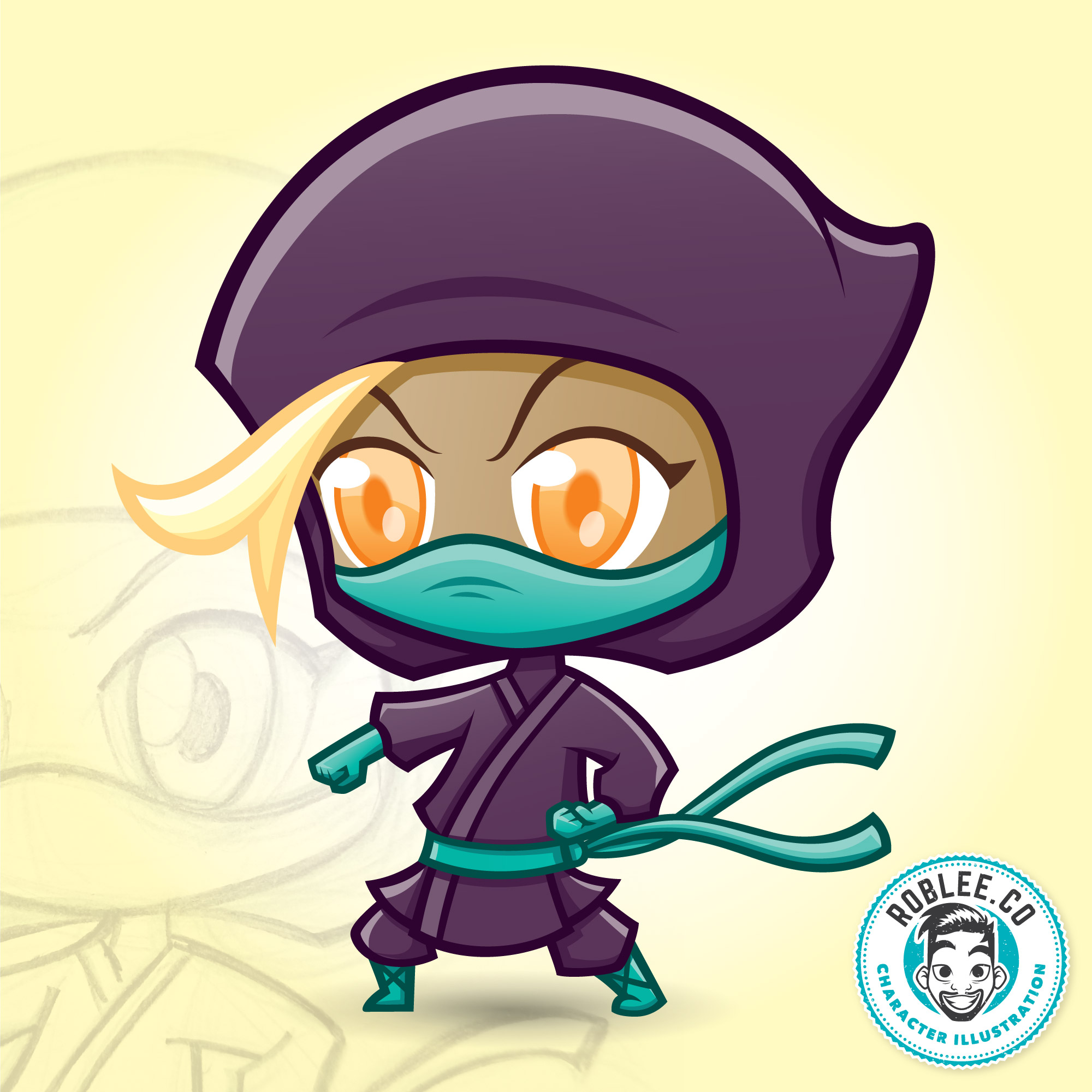 As part of the chibi character collection I had to design a ninja character. This is based on a ninja in the classic 80s movie style and I decided to play with the colours a little. I posed her in a classic karate forward punch stance as she’d obviously be trained in some form of Japanese combat. 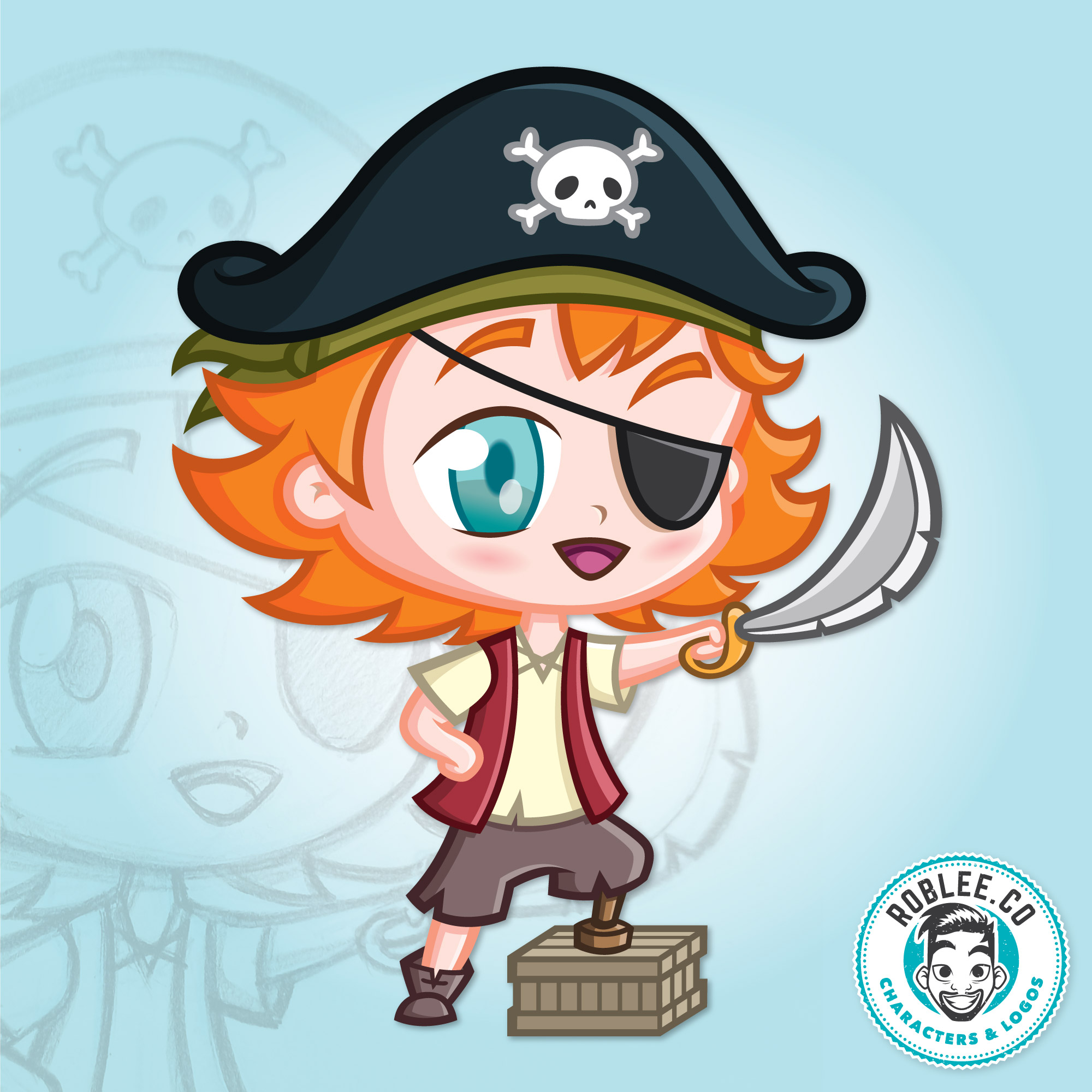 I designed this chibi pirate for the fun of it. I’ve been a long time fan of the chibi style of character. What I like about the chibi style is that you really have to think about what to include in your design due to the smaller body size.

Some of the designs I come across online are mind-blowing. They’re both intricate and beautifully simple at the same time. They’re a lot more difficult to design than they look!

I’m going to produce a small series of chibi characters just to explore this niche and see what I can learn that can be applied to other character styles. 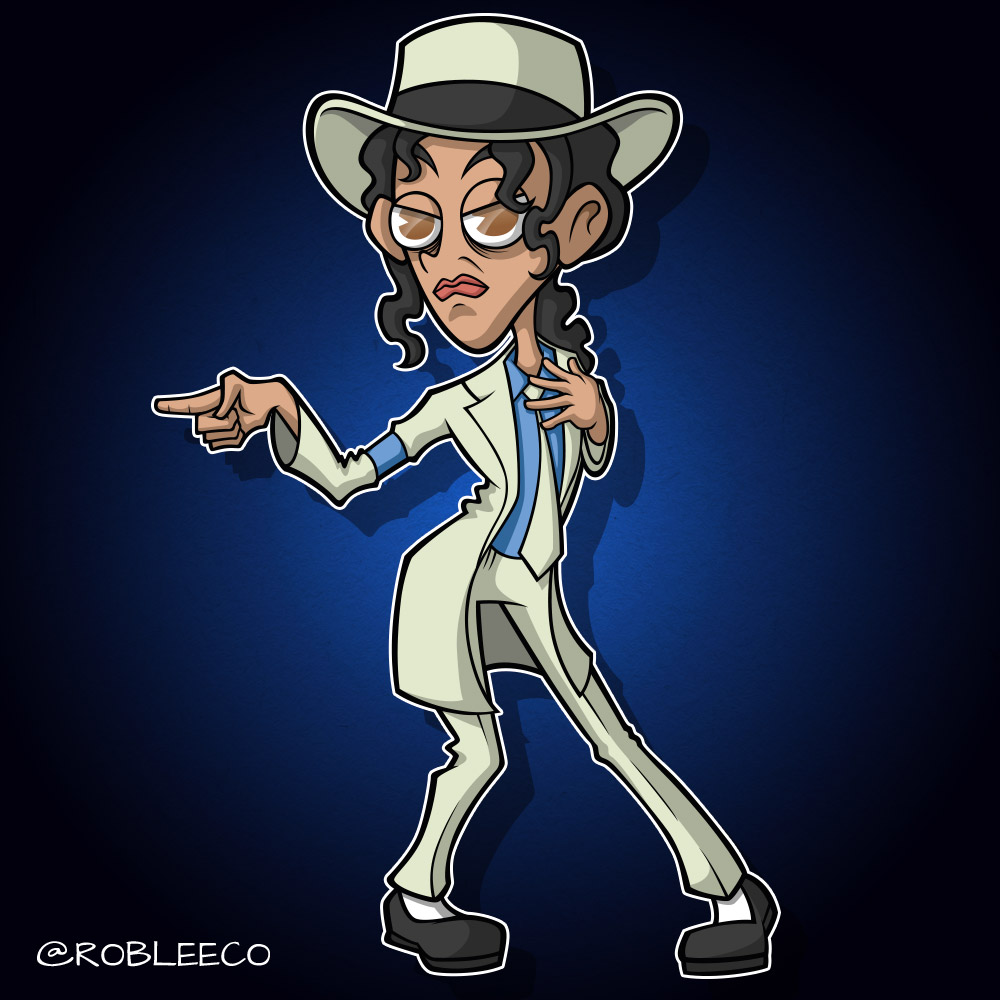 Ray Park, is an actor and martial artist best known for playing the best part in all of Star Wars: Episode I – The Phantom Menace. Of course, he was Darth Maul. He recently reprised his role in the Solo film.

This was challenging and a lot of fun to draw. Some of the proportions around his left arm are a little off and his pose could do with adjusting, but overall I’m happy with how it turned out. 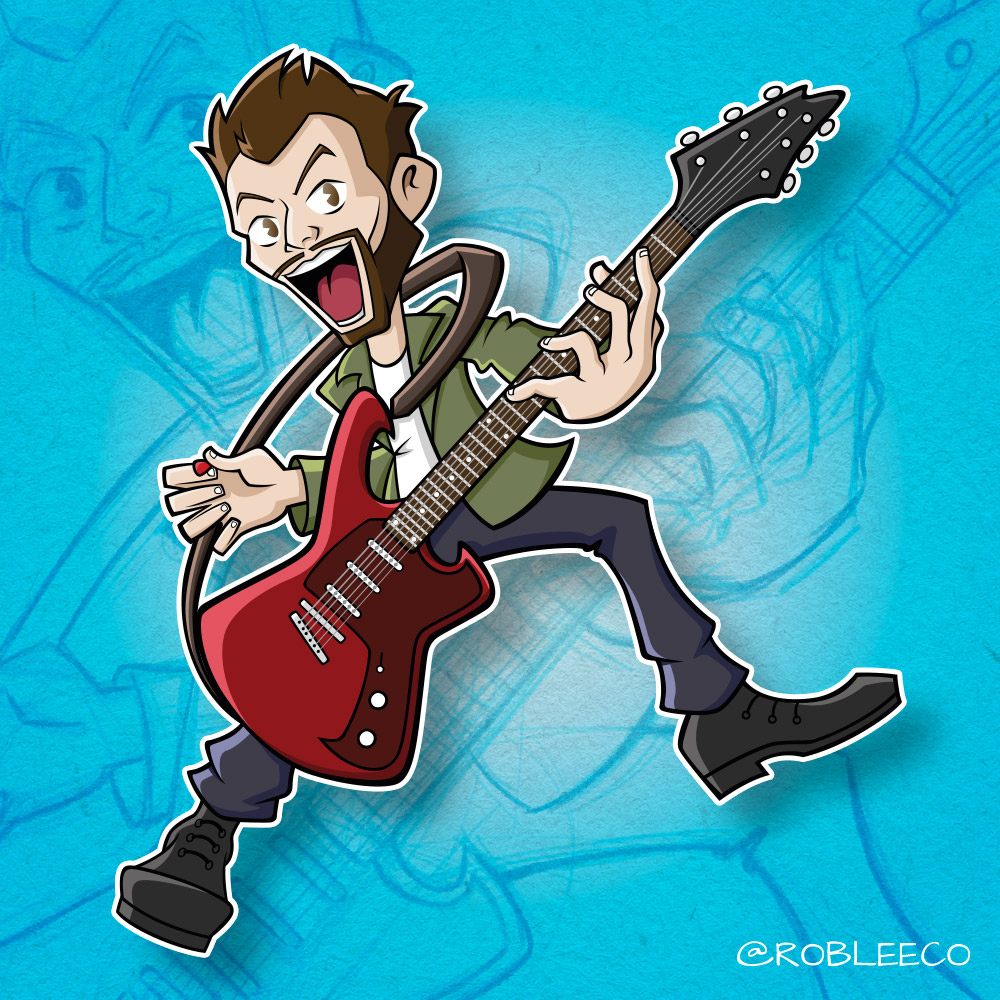 As a guitar player, I have many guitar heroes, Paul Gilbert being one of them. He’s a very energetic and expressive guy, so that’s what I tried to get across in this character design. This is one of my favourites to date. Sketched in Sketchable and vectored in Adobe Illustrator. 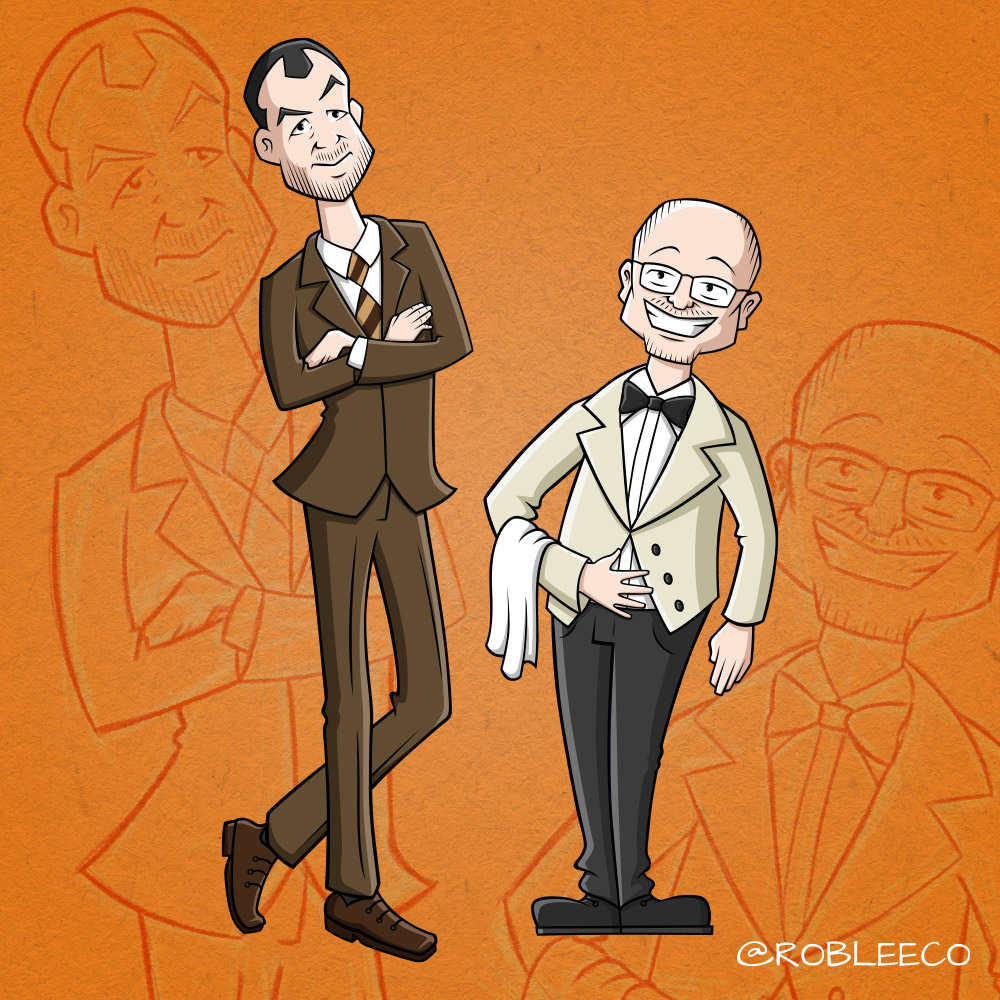 My mum works at a restaurant caf? in Prestatyn, Wales called The Tudor House. The owners Paul and Ivor will be having a website made soon and wanted me to design characters of the both of them in the theme of Fawlty Towers.

I think I’ve captured the both of them well and look forward to seeing them on the website! These characters were sketched in Sketchable and vectored in Adobe Illustrator. 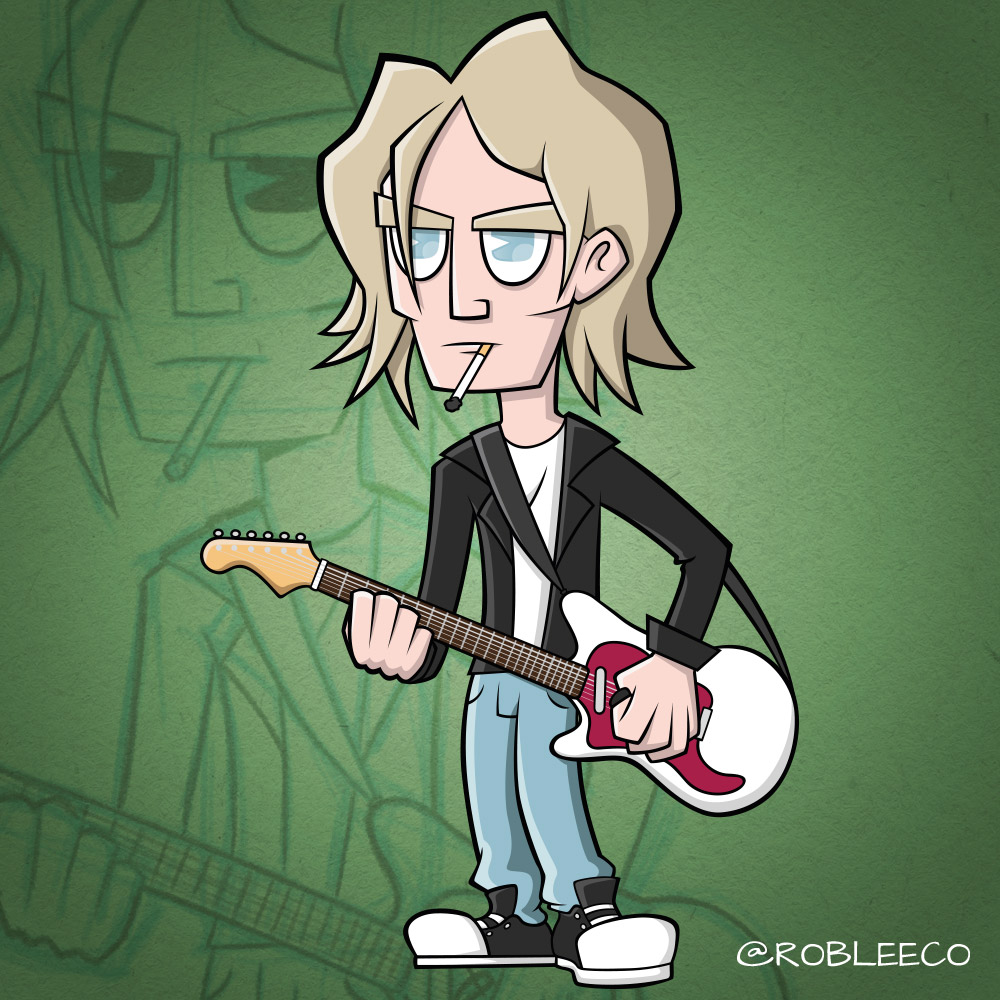 Another addition to the icons of entertainment and subject of a conspiracy theory surrounding his death. Kurt Cobain, frontman of Nirvana was extremely influential in music and inspired penty of successful bands. Another one that died too young.

The initial sketch was drawn in Sketchable and final illustration was created in Adobe Illustrator. I’m pleased with how this one turned out. 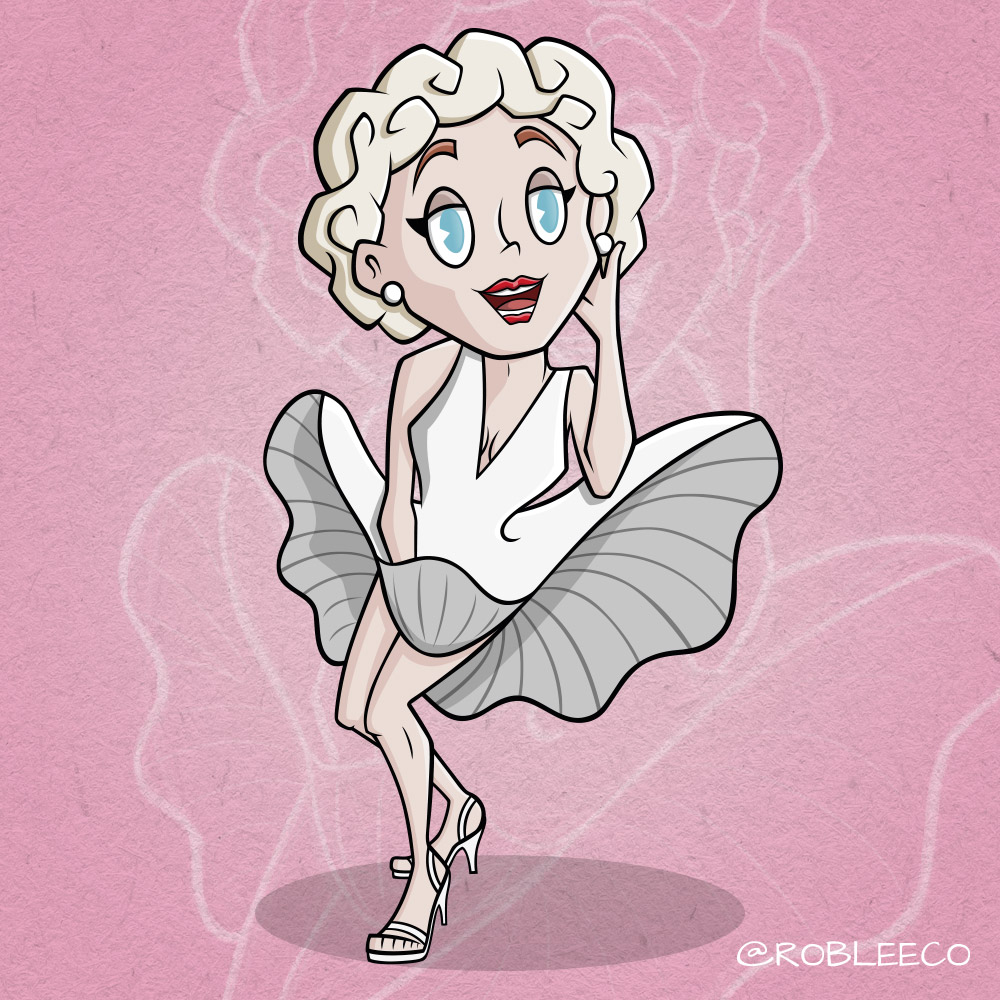 Another Hollywood icon today, Marilyn Monroe in the classic wind blowing up dress pose. Looking at it with fresh eyes the morning after, she might look a bit too masculine. I should have been softer around the face shape and given her slightly smaller feet. Overall though, I’m pretty happy with this one. A cheeky wink may have made this a little more engaging. I think I can give this one another go at some point with these improvements.